The second lecture I attended of the Professional Contexts module was with James Arthur Allen, who basically sat us down and spoke absolute truths about photography and the industry we are about to go into. I loved this session as it felt like a really honest, open discussion, that had so much importance packed into it, but didn’t feel too overwhelming.

James pretty much started the session with the sentence ‘If you don’t love photography, you’re probably never going to be any good at it’. We all laughed, but its true. Leading on from Morag’s discussion, the idea of passion underlines everything we do.

‘Photography is a format that allows life to happen, to allow you to engage with it, and then go away and reflect on it, and get right back out there and do it all again’. This was the basics of the lecture, reflection; always be doing it, ripping your work apart, praising yourself, just going ‘meh’, just always be reflecting on what you could do better, what went wrong, what went right. Reflection is key to development.  Always be making, if you’re not making as a photographer then youre irrelevant, because what else could you possibly be contributing to the photographic world?

James talked of finding our voices within the creative world, not leaving it until third year, also, calling ourselves ‘photographers’ now, not leaving that until third year, because come the end of third year, we’ll be leaving to be photographers within the real world industry. ‘Get used to being hit down, get used to working hard and dealing with knockbacks, do the shit jobs that need to be done to get the money so you can fund personal projects’. We were told to actually believe in our work, becuase who else genuinely will? Be your own biggest fan, nobody owes you anything, it’s up to you to get where you want to go. Dont take rejection as gospel; they might just have really bad taste…

By this point in the talk, I could really see James’ passion for us as young creatives, especially as women, as he really emphasised the important of reaching out and learning our contemporaries, as we are going into this industry. But also realising how important photography can be as a tool to affect change and how openly critical and reflective you are allowed to be on the world around in order to affect that chagne. We are the emerging talent in the world, make our voices count. Our voices can be angry, sometimes they have to be angry, just get passionate, make your opinion count.

But the main point of this lecture was the idea of reflective writing and we were introduced to Gibb’s Reflective Cycle, something that I should probably be using to write this (I’m not). THe idea of the cycle is just to be constantly moving forward with your work and reflection, something that I already know I struggled with in the first project as I wasnt keeping the reflection going as I went along, writing it in retrospectively. I hope in future projects I can be more honest with this and find the necessary time to reflect within the ‘aura’ of the idea, before the next one comes along and replaces it. 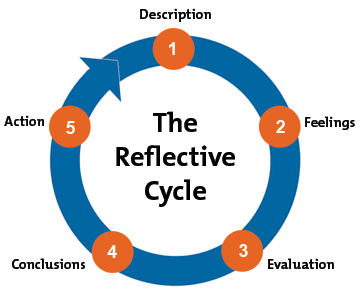 The only thing left to add was the idea of owning your mistakes; don’t hide them,embrace them, work with them, WEAR THEM, they are so intrinsically important to a creative for development and self reflection. We learn by doing (but also crucially, by not doing, and then realising we should have done).

The lecture was great, again I came away feeling inspired, I enjoyed the blunt honesty and engaging way in which the content was given to us.